Think You Know How a Swamp Cooler Works?--Think Again 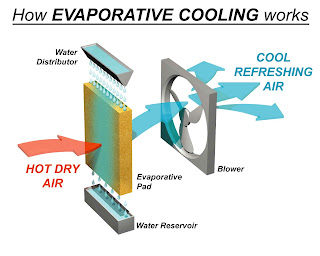 The simple swamp cooler it is a lot more sophisticated than it gets credit for.

Swamp Coolers
The evaporative cooler or "swamp cooler" uses evaporation to cool air. Notably it only works when the air outside is somewhat dry. At high altitudes evaporative coolers work great. For a small cost in electricity and water you get cooling with much better efficiency than a refrigerated cooling (AC) system.

But there are limits. It doesn't work in humid air (such as swamps), and typically it can only cool air a few tens of degrees at the most. So 100 degrees outside means 80 degrees inside.

The swamp cooler has a wet pad (like a rigid sponge) and a fan that draws air from outside through the pad and into the house. Pretty simple.

There two principles at work. One is evaporative cooling (not why it works). The other is heat of entropy (how it actually works).

Evaporative cooling
Interesting fact: the water in a bath tub always becomes cooler than the room it is in. The reason is that there are warm molecules and cold molecules in the water. The hot molecules have enough energy to escape into the air, leaving the cold ones behind. It's like picking teams for basketball. The hot players get picked first, leaving a pool of cool players. The faster the evaporation, the cooler the tub will become. But notice that the air picked up all the warm molecules, so how would that make the air cooler? Well, it wouldn't if this were the only principle at work. The cooler would get cold but the air would stay warm. There must be something else going on.

Heat of Entropy
To understand how this swamp cooler really works, you have to know what temperature actually is.  In a gas temperature is related to the average amount of energy per molecule. When hot dry air passes through the evaporative pad, it saturates with moisture.  Conceptually, the air did work to evaporate the moisture. The mixing of the water molecules with the air means the gas now has more ways to divide up its energy. With more entropy, or ways to divide up the energy, there is less energy per molecule. (More mouths to feed means everybody gets less food.) Another way to think about it is the air picked up more heat capacity without getting any additional energy, so it has to have a lower temperature.

The air, as it becomes laden with moisture, has more chaos for the amount of energy in contains. The scientific definition of coldness is the change in the number of ways to arrange the energy per change in energy. To make something colder you can either take away energy (refrigeration) or add ways to arrange the energy (load the air with moisture).

So that's it, the so-called "evaporative cooler" doesn't work on the principle of evaporative cooling, like bath tubs do. It works on heat of entropy. I suppose they could always market these things as "entropic coolers"....
Posted by Dan Allen at 10:02:00 PM