Seriously it happened to me: Planes, Trains and Automobiles

4 trains, 2 planes, a new cell phone charger, 3 bummed rides (1 from a total stranger), a shuttle bus, a park and ride lot, my car--and did I mention my fly was down the whole time? 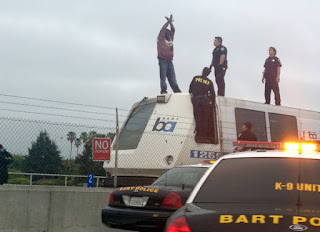 After my recent adventure, I'm considering writing a book titled "How to Get Home, for Dummies".

For those of you who are not left-handed scattered brained physicist inventors, please enjoy this fact-filled tour, showing in excruciatingly embassaring detail why you should be glad you didn't turn out like me.

My weekend trip to visit family start off with the best intentions. I called my brother to ask a math question. He didn't answer so I texted it to him. Apparently, it was his birthday. And apparently the same thing happened 2 years ago on his birthday. I only remember because he called after he got my text, to remind me.

So...I went to check-in online for my flight and realized that my flight was not leaving at 3PM. That was when it was arriving. So instead of taking the train to the airport, I got in my car and drove to Oakland.

Second mistake and it was only 10AM. I was down some brother points and half-day of unplanned vacation.

I made my flight had a great weekend and got up this morning ready to head home.

Before I tell you about the next part, I should confess that I once attended Brigham Young University where everybody is an excrutiatingly honest Mormon. If I ever lost anything, it always showed up at the lost and found, eventually: my sweater, hat, textbooks, calculator--they all showed up on a special shelf they kept just for me with my name on it. My wife went once a week to collect my stuff.

I was supposed to go myself, but I forgot...every week.

So this morning began like any morning. I got up in Salt Lake City at 4AM, bummed a ride off my father in law, caught a flight to Vegas, made my connection to San Jose and took the light rail to work. I was a smooth operator. I didn't even leave luggage behind on accident, like I once did when I left my luggage on Amtrak trying to get to the Oakland airport and then had to drive to Sacramento the next week to pick it up from the lost and found.

It was all good, except for the fact that I was out of cell phone battery and I had to buy a battery booster at Brookstone at the airport at extortion prices so I could be on an important conference call...which I noticed was cancelled after I called in.

I guess I could have brought my charger with me to begin with....didn't think of that.

My fly broke at work. That was embarassing...for everyone. XYZ..hahaha.

After work I bummed a ride off my coworker at the last minute to the Amtrak station so I could get up to Oakland to get my car, so I could drive back to Cupertino, in the exact opposite direction. I got there early! So I called Amtrak and they said I could use my $15 7:30 PM one-way Central Corridor Express ticket on any train.

So I hopped on the 6:55 train...the ACE train. Yes, the Altamont Commuter Expresss, headed for the central valley and the illustrious border village of Tracy, CA. Well luckily when it started up the canyon I realized my mistake. The guy sitting across from me told me I could get off in Pleasanton and take BART back down to Oakland.

I got off in Pleasanton--nice town, only to find out that the last bus to BART had already left. So I was told to walk downtown and catch a bus. I walked downtown, wandered around a bit and finally got directions to a bus stop across from a liquor store. I ran.

I missed the bus by 10 seconds. Yeah.

So then this guy in a Smart Car pulls up and says, "I saw you missed the bus. Need a ride?" So now I'm hitchhiking in the 6th wealthiest town in the US--a calculated risk. I figured he was an Uber driver, but actually he was just a nice NASA engineer who recognized a fellow nerd in trouble--score one free ride to the BART station!

Sometimes you get a break. I took BART back down to Oakland (another $5). Now it was dark. Oakland is my favorite place to be on public transit in the dark...alone...with money in my pocket. I transferred to the airport connector (another $6), called the park and ride place and got a ride.

I felt guilty about the free ride from the guy in the Smart car and wanted to pay it forward so I tipped the shuttle bus driver with the only bill in my wallet (another $10). Hey, it's the bay area, a $10 tip is only 2 hours worth of really cheap rent in Cupertino. 5*24*30 = (a sum you don't want to pay for rent unless you live in Silicon Valley). Well I paid the budget park and ride place $50 for 4 days and got in my hybrid and drove home in the car pool lane out of spite. (It was after hours so the lane was open.)

And that my friends, is why you are glad you are not a crazy left-handed physicist inventor. Because genius and being an idiot are apparently not mutually exclusive.