Game of the Week: Pass The Pigs 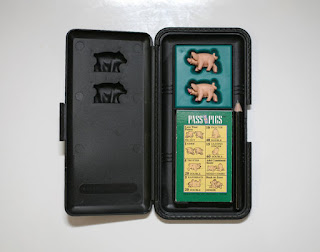 Pass the Pigs, or its slightly less reverent earlier version called Pig Mania, is, without argument, one of the best party games ever invented. Instead of dice, players roll rubber pigs and collect points depending on their orientation. (See the box cover below for Pig Mania for typical combinations.) 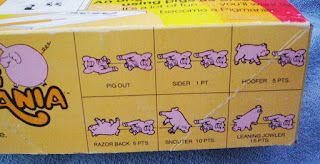 Players roll the pigs until they either pass, or get a "Pig Out" and lose all their rolled points for this turn. If the pigs are touching, you lose all your accumulated points and start from zero. In Pig Mania this was called "Makin' Bacon". In Pass the Pigs, they call it something more benign.

In expert play "Hog Calling" is allowed, where players attempt to guess the next roll of the pigs by yelling "Soooeee" and then prognosticating the next roll. This is where the game gets really crazy. In a recent game, the infamously unlucky player who was firmly in last place hog called her way to a tie for victory after rolling like 10 Pig Outs in a row.

The holy grail of all pig formations is the "Double Leaning Jowler" where both pigs are balancing on their snout, the tip of one ear and a foreleg. In my entire extended family of over 200 people, only my Uncle Mark Allen, a famous cognitive psychologist, claims to have rolled a double leaning jowler.

I should have gone to Johns Hopkins...

However, something even stranger occurred at a recent cousins game night, when my cousin Katie rolled a never-before-seen pig combination. It was a kind of leaning razorback, like an upside down leaning jowler.

Notice the pig at the top of the picture has only one ear touching the table.

Miraculous. Astounding. I felt like I was watching something out of Charlotte's Web.

If you have never played Pass the Pigs with a group of rowdy people, you owe it to yourself to experience the joy, the drama and the zany fun of the greatest pig rolling game ever invented.