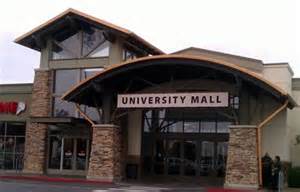 In the town where legendary science fiction writer Orson Scott Card (Ender's Game) grew up, in the valley where Stephanie Meyer (Twilight) learned to write about sparkling vampires, where you can sign up to take writing classes from fantasy legend Brandon Sanderson (Mistborn), there is a mall where you can get...

Shame on you Utah Valley. Shame.

If your shopping partner insists on going to this big overpriced fashion bazaar, hop across the street to the nearby hobby store, where you can pick up copies of the free magazine Utah Geek and buy motors for your rockets. Or, take a drive down the road to Provo Towne Centre, where although they apparently don't know how to spell short words like town and center, you can find a game store with a backroom, buy Arduino parts at Radio Shack, find cool out of print Star Wars books at a used book store and generally enjoy your dweeby self without being accosted by lotion peddlers. :)

In fitting irony, it appears that University Mall, with the first-ever negative Nerd Shopper Score, was where Studio C's epic mall parody sketch was filmed.
Posted by Dan Allen at 6:39:00 PM